When DC unveiled their new “Peel” logo, my first thought was, “How the hell did they miss the boat on the New 52 relaunch?”  The relaunch was announced in May, and it seems creators began getting approached in February and March (and likely earlier) to pitch for books.  So why was a new logo not planned to go to press in September instead of announcing it 5 months after the relaunch, and debuting it in print a total of 7 months after.

Even more disturbing in my mind, from a corporate identity standpoint, is the release of the “New 52” hardcover, a $150 tome featuring all 52 new #1s from DC’s relaunched universe, with the old DC “Swoosh” logo.  It’s one thing to say this is calculated to keep DC getting buzz in the media, and in that sense I get it.  Press, like everything else, is cyclical, and you have to keep feeding to stay alive.  But… the first major salvo in your “This is what DC Comics is about today” war has your old logo on it and you’ve been planning this initiative for at minimum 8 months, and likely closer to a year out.

But back to the matter at hand. This morning DC made perhaps their biggest, and certainly boldest, announcement since the news of the relaunch.  After years of rumors and speculation, DC will release prequels based on Alan Moore and Dave Gibbons’ 1986 classic “Watchmen.”  “Before Watchmen” has some seriously amazing talent involved, and I hold out high hopes for the books and their success.

I’m not arguing the merits of this publishing decision.  I never begrudge anyone who wants to print money, and it’s not like they put schlubs on the book with no reverence for the original story and creators.  I’m curious as to who is editing the books, but I trust DC has their top guy[s] on it.  At the end of the day, when “Before Watchmen” has come and gone, I’d wager that the books will be better than most are expecting, and those who take a chance on them will end up enjoying and possibly loving them.  Still others will scream blasphemy and hate them at every turn, despite never turning a page and giving them a shot. That’s what the Internet is for, after all. Remember, just like a movie adaptation, the original “Watchmen” exists much as it has for more than 25 years.  It’s there whenever you want to read it, and DC can never change that.  That story is what it is, these are just new stories for those who want to read them.

What does surprise me is the logo used on the covers released today.  DC Comics unveiled several alterations to their new logo based on various characters or lines of books, and the reaction by many was, “Oh, well those are cooler than the plain logo.” Many graphic designers have been quick to point out that in practice logo variants are seldom used because of deadlines and other factors, but the fact remains that DC was at least considering alternate applications of the “Peel.”

This is the cover released by DC for Brian Azzarello and Lee Bermejo’s “Before Watchmen: Rorschach” book. 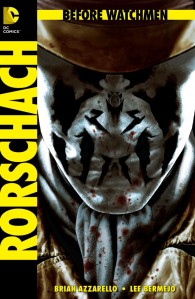 The logo in the upper left corner looks an awful lot like… a yellow version of the new DC logo. But wait — didn’t DC already show off a “Watchmen” variant of their new logo? Yes. Shouldn’t DC’s biggest announcement of 2012 showcase their logo and revamped corporate identity in the best possible light? 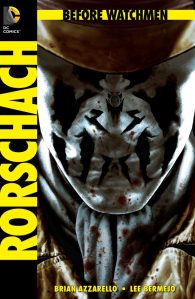 Much better. It better serves both the new DC Comics brand, and that of “Watchmen.” Hell, including the “Watchmen” variant in your logo mock-ups pretty much confirmed this was happening, so why not go all in. There are a million reasons for this. This isn’t the final cover — where’s the price, issue number, bar code, etc. This is just a promo image. The list goes on and on. But I’m a firm believer in putting your best foot forward.

DC has made a number of great decisions in the last nine months to a year, and they’ll likely keep it up. But I’ll continue to call them out, as well as anyone else that needs it, if I feel they’re not doing everything they can to move themselves and this industry as a whole forward.  If you love comics, you have to put that love in action and do everything you can to make sure the industry not only survives, but thrives.

I’m looking forward to “Before Watchmen.” I just hope that DC uses the right logo so I know they have their heads fully in the game.

Rian Hughes is one hell of a designer, and also an incredible artist. I was fortunate enough that he found time to work with me on DAYS MISSING, where he designed the logo and trade dress for us. I respect him, his work and his opinion immensely, and I was really happy to get his take on the new DC Comics/Entertainment “Peel” logo as he’s done plenty of work for DC in the past.

He posted the following on his facebook page (the bolds are mine):

Here’s the thing – a comic book logo has got to fulfill two quite different criteria that often pull the design in different directions.

It has to represent a forward-looking professional and modern company.
It also has to communicate what the comics are all about.

My main comment on the last DC Comics logo reboot was that it looked too… well, a bit too *comicy*. Outside of the comic ghetto, in the wider real world of design, it looks distinctly cheesy.

This one I applaud for taking a more clean and modern approach. More legitimate and, well, more *designed*.

What I would say, however, is that it’s not the most iconic and memorable logo I’ve ever seen. It’s OK. Not bad. But not “YES! Perfect!”, which is what one aims for in an identity mark.

I also question how well it’ll work in context on covers, where it may jar uncomfortably with the art styles.

The perfect logo, I believe, would have two things:

First, a sense of punchy dynamism and excitement – a reference to the action/adventure core values of comics, WITHOUT being a derivative pastiche of some kind of so-called *comic style* (read: no dot screens, sound effect style lettering, speech balloons, explosions).

Secondly, it should work on screen and print, be relevant to comics in the iPad digital realm, and able to stand next to other high-end publisher’s logos without embarrassment. Legitimate, modern, clean, without being too dull and corporate.

I think DC has tried to move the logo from the first category (the swoosh one) to the second category (this Landor version). The swoosh version was too comicy, this one just looks too corporate. Dull, Lacking in dynamism and punch. On the covers, it reminds me of a logo from a blander umbrella corporation that just happens to have a comics division. What we really need is a mark that somehow covers *both* categories.

The variations – the versions with the imagery in – lift the design, but I know that in practice these versions, nice as they are, rarely get used. The fall-back logo – the basic, no-frills version we’ll see on spines, and covers – has to stand on it’s own without these fancy polishes.

A logo has to work “bare”, as it were, stripped of colour, stripped of fancy Photoshop effects. That’s the measure of an iconic logo. This one fails in that respect.

Not an easy brief, I know.

So, an interesting effort that I can understand the reasoning behind, but feel it’s not iconic and punchy enough to hit the mark. Two steps forward, one step back.