One of the things I wish I had emphasized more — every sentence, in fact — at the seminar Joshua Hale Fialkov and I taught last weekend is how important planning is when making comics. There are so many things to consider, so many moving parts, and so many thing that can (and will) go wrong that without proper planning you’re in for a nightmare.   And that’s just creatively…

I have a bug up my ass about logo design (and design in general).  I know this. More often than not, I don’t blog unless I’m up in arms about something, or at the opposite end of the spectrum, completely despondent and uninspired.  Well, today I have to put a buddy on blast.

Tyler Kirkham, who I worked with on waaaay more books than any artist other Stjepan Sejic during my tenure at Top Cow (both on TC titles and on the books we packaged for Marvel), has a new book on Kickstarter called “The Monarchy.” I first saw the page when the campaign went live and thought, “something about that looks familiar.” I saw him post about it again today and it all clicked. 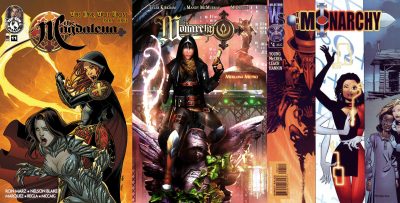 “The Monarchy” logo is basically the logo from Top Cow’s “The Magdalena.” I think Aspen’s Peter Steigerwald designed the original, but don’t quote me on that. I pulled up a Maggie image and sure enough, the case could be made for trademark infringement based on the logo. It’s… really close.  But that’s not all. The title sounded funny in my brain today. Wasn’t there already a “Monarchy” comic book?

Turns out, yes. Wildstorm published a “The Monarchy” title that spun out of the second year of “The Authority” and ran for 12 issues from 2001-2002. I think I may have even read it, back when I was catching up on all that goodness. (Remember Warren Ellis’ then totally under-the-radar run on “Stormwatch” that introduced The Authority? Stellar, stellar stuff.) And don’t think I’m not noticing yet again some similar elements in the book’s logo to Kirkham’s “The Monarchy” logo.

Look, I’m not saying anyone gets sued here. And I know Tyler and Mandy McMurray, the book’s co-creator, and they’re good, honest people. Either they didn’t realize what they were doing or did it intentionally as an homage with no ill will or infringement intended. But knowing that it could become an issue… why risk it.  Certainly with regards to the title, why not do a quick ™ search with the USPTO and see if they’re in the clear (and if they have, and they are, forget I said anything).

If you’re doing creator-owned and self-published books, you have enough on your plate. But forgetting that you need to make sure you’re doing something wholly original that doesn’t infringe upon someone else’s marks is part of that game. There are few things worse than spending your time and effort completing something and not being able to put it out or getting held up in a lengthy legal battle.

To bring this all home, I urge all you DIY creators out there to think. And when you’re thinking, brainstorm all the things that might go wrong and figure out ways to cover your ass with proper scheduling, foresight, and probably consulting a lawyer. Or at least Google, Search Engine at Law.