Some people let video games, side projects, and procrastination get in the way of their work.  While I’ve been guilty of the latter my whole life, the former have never really held me back.  And yet I find myself distracted by a number of things.  I thought I’d get on track after my move, but new things have popped up.

My fish is sick 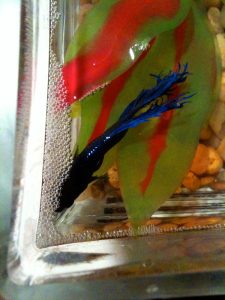 A few months back my girlfriend and I bought a betta fish.  His name is Sushi, and he’s one of the prettiest men I’ve ever had the pleasure of meeting.  He was doing fine and dandy until I moved into my new place.  I changed his water on the 16th, but due to my second distraction (see below), I’ve been unable to do it again since.  This past weekend we got around to changing his water and he looked awful.  His tail was ratty as hell, his fins were all tucked in, and he was hiding.  He would end up face down under the decorative rock and gave me quite a few scares that he had ceased to be.

It breaks my heart to see him go from majestic to sickly in the span of a few short weeks.  I’ve been spending a lot of time with him the past few days, talking to him and making sure he eats his food.  I’ve also got him in super warm water via a heater.  Seeing my fish sick like this is taking a toll, so I can’t imagine what will happen if Future Dog ever takes ill.  Sushi is now blowing bubble nests left and right and appears to be on the mend, which is easing my conscience a ton.

I broke a finger and got stuck in a cast 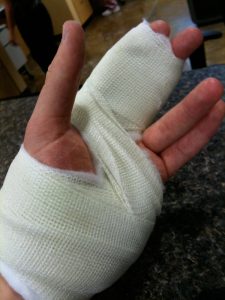 I jammed my finger playing dodgeball.  Two days later I was in a splint, playing again.  I had a great game and knew I couldn’t take a sabbatical from the sport I love.  The X-rays came back negative two days later.  A week after the initial injury, I was playing at the site of the initial injury and took a shot to the finger.  It knocked the splint clear off and I could feel my pulse in my finger.  I jammed it back in the splint and kept playing, somehow managing to have an ok game despite wanting to chew my messed up finger clean off.

I didn’t think that a rubber ball could break my finger if jamming it into a wrought-iron grate hadn’t.  The fact that it moved just millimeters and had out of control bruising didn’t dissuade me.  Alas, I was wrong, and had suffered a fracture (in three places if I’m not mistaken).  But I didn’t find this out for another 10 days.  Luckily my finger’s alignment was pretty good, so I’ve only been in a cast for three weeks.

I go to the doctor in the morning (not the shitty one, the good one with the digital X-ray machine).  I’ve got every non-broken limb left crossed and hoping I get this thing off.  They say I might need to undergo some physical therapy to regain full mobility in my index finger.

This is the second injury to my left hand in the last year.  The last one was bone in my thumb and a splint, this year my index finger and a cast (forcing me to wear a vacuum sealed rubber glove in the shower).  Each injury has made me appreciate how good I have it just to have been born free of any disabilities.  Everything is harder with one good hand.  Bathing, putting in contacts, tying shoes, buttoning, washing my hands, cutting up food, pleasing multiple erogenous zones simultaneously, typing and more.  I just want to get back to 100%.

(And there was also the added bonus of tearing up my good knuckles on pavement removing a melted bag from my car’s exhaust last week, and cutting my good thumb on the blade of my Ninja whilst doing dishes tonight.  I feel like a handless wreck.)

More than anything, I’ve allowed these things to distract me from my writing (the move whilst broken didn’t help either).  Twice in the last two days I’ve had the heads of companies tell me they really like the work I’m doing for them, and had my editors at each ask what else I want to do.  I looked at the last round of (solo) pitches I sent out and wasn’t happy.  There wasn’t a lot of passion in them, and none of the ideas really stood out.  I’ve been having a really hard time answering the “What do you want to next?” question.  Not what I think they want me to do, but what I want to do.

I know I want to tell stories.  Way more than I want to edit, as various setbacks this week alone have proved over and over.  Letting these distractions get in my path and hold me back has made me ask some serious questions about my next step.  I’m getting close to clear, and closer still to zeroed in on what the next move is going to be.

Everyone has distractions.  Some of their own making, some that can’t be avoided.  It’s how you handle (and learn from) them, and how you triumph in the face of adversity that defines you.  That makes my next step very clear in terms of my career.

Now is the time to define myself.  Get some original IP moving and get back to LYP or a new screenplay and get that 12,000 pound gorilla off my back.  I’m replacing distractions with action.